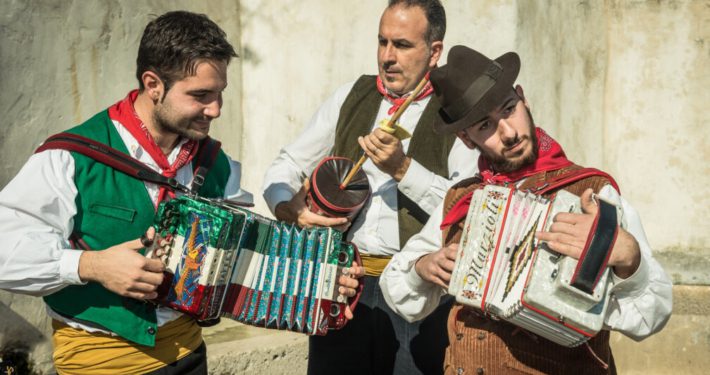 Work in the fields, love, marriage and religious passion are just some of the main themes that can be found in the texts.

Often, in the so-called “stornelli a dispetto”, teasing and mocking the boss: jokes between men, but also jokes addressed to women and their sensuality.

The group also engages in the interpretation of songs from Neapolitan and Roman folklore such as’ O sole mio, Torna a Surriento, Rome nun makes the stupid tonight, etc. .. Performed mainly abroad, these songs flank the most typical of Ciociaria.

The oral testimonies, together with the musical ones, make up the silent background of the entire repertoire.

The words and music of the Alatrian songs “L’Arca”, “Gli Culacchiegli”, “Juccia”, “La cipolla”, “La tesserella”, “La ciammotta”, were written in 1900 by Gerardo Celebrini and Giovanni Ricciotti on the occasion of the Maddalena Fair that occurs on July 22nd.

They are mainly performed with the “two-barrel” organ and a competition is often established between the performers and those who recite it more. In the performances, the folk group performs these typical “Stornelli” also as a mode of charge. Some verses are handed down by tradition.

A wife thinks of her husband away while “weaving” the loom. [Words of G. Celebrini music by G. Ricciotti]

Timid approach between lovers. [popular song of probable importation, learned by tradition; perhaps the version “At midnight on the dot” documented in 1928 was its inspiration]

The lover declares himself to the beloved on the occasion of the feast of St. John, a day notoriously dedicated, to the tasting of snails. [Words of G. Celebrini music by G. Ricciotti]

Courting song of courtship between lovers. [Originally, solo without accompaniment; collected in 1934 in the district of S. Filippo in the Villa Pagani of Veroli, which was its executor. Learned by tradition – Elab. Luigi Colacicchi]

Sweet lullaby of a mother who, though busy in her housework, takes care of her baby, swinging her cradle, resting on the ground. [Words and music by Luigi Fiorletta]

Song dedicated to the beloved [Words and Music by Achille Gussati, former music director of the group].

A disappointed lover; his beautiful has decided to grant his thanks to the rival in love. [Solo and choral with organ accompaniment or without. Generic. Harvested in 1934. Elab. L.Colacicchi]

Love follows the course of the seasons. [Solo and choral with organ accompaniment or without. Generic. Collected in 1934 in the Sorano. Proc. Luigi Colacicchi]

A hopeful sweetheart that the girl thinks of it. [Words of G. Celebrini music by G. Ricciotti]

Maria Necola, beautiful and coveted, but … remained a spinster. [Solo and choral with organ accompaniment or without. Generic. Collected in 1934. Executing Vincenza Matteucci in Lisi called “La Cenese”, storytellers in the fairs of the region. Accompagnatore all’impetto the figlistro D.Lisi, also storytellers. Learned by tradition Elab. L.Colacicchi].

Homage to a typical vegetable of rural life. [Words of G. Celebrini music by G. Ricciotti].

The difficult “conquest” of the beautiful country girl. [Solo and choral, without accompaniment; collected at a popular gathering of Fiuggi in 1934. A group of commoners and girls of the bourgeoisie were executing. Proc. L. Colacicchi].

The “itch” of love … [Solo, without accompaniment. Generic. Collected in 1932 performer Vincenzo Olevano, cantiniere, called “Pacchiarot ‘” and “l’ammentario” (from ammentor, inventor, that is improviser of occasional verses). Learned by tradition. Proc. L.Colacicchi].

The resentment of a betrayed wife … [Solo and choral with organ accompaniment or without. Generic. Collected in 1934 in the Sorano. Proc. Luigi Colacicchi]

The embellishments … to “conquer” the boyfriend. [Solo and choral, without accompaniment; collected at a popular gathering of Fiuggi in 1934. A group of commoners and girls of the bourgeoisie were executing. Proc. L. Colacicchi].

Singing to the spouses. [Soloist, with organ accompaniment or without. Generic. Collected in 1934 Silverio Calicchia performer. Learned by tradition. Proc. L.Colacicchi].

Women with the “concone”. [Solitary, without accompaniment. Harvested in 1931. Executing Lucia Del Monte; maid and housewife learned from her mother Maria. Learned by tradition from the farmers. Proc. L.Colacicchi].

Dedication to the beloved on the occasion of the feast of Mary Magdalene [Words by G. Celebrini and music by A. Ciarrapica].