Aria di Casa Nostra offers a repertoire of dances and music characterized by a liveliness that does not leave viewers indifferent. 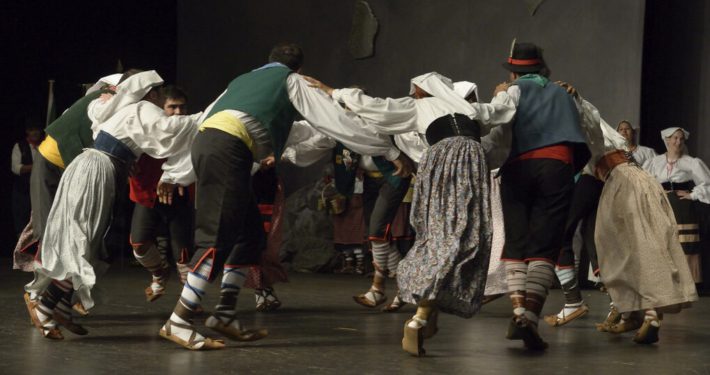 The most common theme in the dances is the courtship, whose movements refer to an often forgotten etiquette. Others, however, refer to pivotal moments of the farming world as the harvest.

The music and dances are representative of a playful Ciociaria, but also tenacious and hardworking.

Courting dance. The copper bowl is a key element of everyday life: with that the girls went daily to the spring to draw water. The boys were often there waiting for them to make the thread and try to conquer them.

The dance, at a ternary rhythm, was imported into Ciociaria during the Second World War, by a contingent of Polish troops who settled in the territory for over two years.

Cheerful and carefree dance. In our dialect the vetches are the spinster girls, who show off by making coquettish, hoping to take a husband.

The male and female collective split, dance intertwined, but never united. Boys and girls are reflected in a lively dance, with rapid movements. Women show themselves to be beautiful and proud, while with men they seek and escape.

Located between Rome and Naples, Ciociaria has often enjoyed nearby influences. In this case it was Campania that left a mark among the people of these places: in fact, the tarantella is a cheerful dance with a clear Neapolitan influence.

Lively dance to the rhythm of a quadriglia. The “Giacchi” in our dialect are the typical skirts worn by the women of Ciociaria.

A dance that has its roots in the times when the Pontifical State had supremacy over the area: it was the French troops at the service of the Pope to bequeath this dance with rather slow movements.

Pretty lively dance of Renaissance ancestry, with quadrille step, the approach and the removal of couples, up to the royal elevation of the girls.

In this dance is represented the work done by men and women after the harvest with the typical tools: the uigli, stick of medium length for the beating of the wheat and the igliara, sieve to divide the wheat from the chaff.

The name derives from the Latin “saltatus”. In some areas it is also called “ballarella”, “salterello”, “sardarell’ “: it is probably the most typical and widespread among the ciociare dances. The couples alternate with the group figures, the knees of the dancers rise and fall on a cheerful and determined rhythm. Like the “ciocie” in the calves, the dancers cling to each other, bind themselves on their shoulders and then launch into whirling “girotondi” with a hopping gait.