You are here: Home1 / The Group 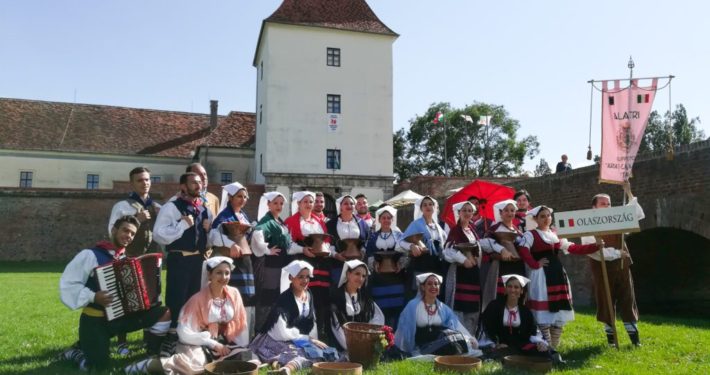 It was the 1950, when Flavio Fiorletta decided to give life to the Enal Folkloric Group Ciociaro from Alatri

It was a concrete attempt to recover, hand down and enhance a cultural heritage kept alive for centuries by the local popular tradition.

It is from here, that the history of the current “Aria di Casa Nostra” Folk Group begins. A path that has its roots in a long and patient research work to collect and readjust customs, instruments, dances, music and ancient songs .
The Group’s performances, in fact, are lowered in the village tradition, with a repertoire that pays tribute to those who are the ancient values ​​of the land named “Ciociaria”.

The first International Folklore Festival of Alatri is born

Another merit of Flavio Fiorletta, was to share their passion for traditions not only exporting their culture, but also recreating in “Ciociaria” atmosphere, colors and multiculturalism typical of international events: it is in 1970 that, in the “shadow of the ciclopi”, thanks to the pioneer Fiorletta, is born the first “International Festival of Folklore” of Alatri, today became one of the most long-lasting and prestigious folk festivals in Italy.

The recognition for the efforts made in research, the care and dissemination of traditions, is evident in 1976, when the “A. Toepfer “in Hamburg, gives Aria di Casa Nostra “the Europe Prize as best group of art and popular traditions. In fact, over the years, the group has received awards and recognitions for the beauty of its dances, songs and costumes. In almost seventy years of history, the “ciocie” of Alatri people  have crossed the stages of the most important Italian and foreign folk events: from Portugal to France, through Switzerland, Germany, Hungary, Poland, Malta, Greece, the United States of America, Syria, the Azores and much more. Without forgetting the nurtured stages in Italy. There are also numerous participations in television programs for cinema and theater, as well as for events of national importance.

Now, the Folk Group has about 40 members, including dancers and musicians: with the typical “ciocie” embraced the calves, dance a typical “saltarello”, a  characteristic dance “Ballo delle Conche” and harmonious waltz to the sound of “organetto” (accordion) and other instruments.

The most beautiful presentation of “Aria di Casa Nostra” are (and have always been) the sincere smiles of young people actively involved in the care and dissemination of the cultural traditions of “Ciociaria”, in love with their country and wishing to know those far away, with a view to multiculturalism and friendship.

This message is only visible to admins.
Problem displaying Facebook posts. Backup cache in use.
Click to show error
Error: Error validating access token: The session has been invalidated because the user changed their password or Facebook has changed the session for security reasons. Type: OAuthException
Scroll to top